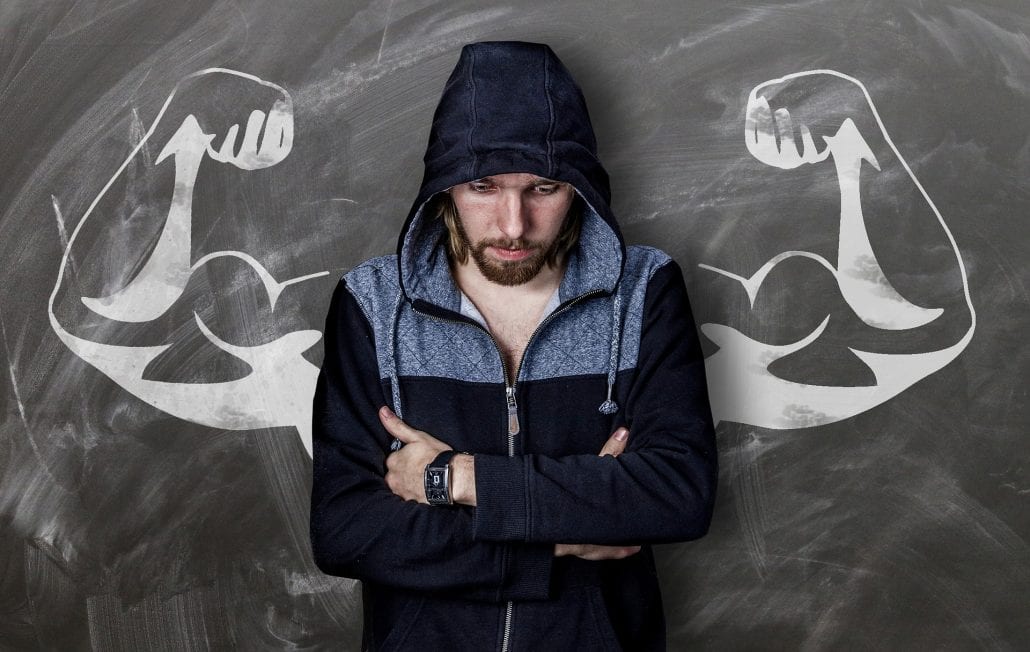 Common disorders (and how to identify them)

Many body image disorders revolve around food and eating— but they also emerge through obsessive exercising and even in drug use. Here are ones to look for:

Attempting to be thin, adolescents use one or a combination of ways to restrict food intake. They may: • refuse to eat, move food around on plate • purge food from their bodies by vomiting • misuse diuretics and laxatives • use stimulants to suppress appetite LOOK FOR: weight loss, brittle hair & nails, dull skin

Eating large amounts of food in small amounts of time LOOK FOR: (hard to spot because many binge in private)

Obsessive-compulsive attention to a perceived bodily flaw. Here are examples:

Though the disorders listed here are serious—and may require professional medical and psychological help—there are things you can do to both prevent and ameliorate body image conditions.

One of the most beneficial things you can do is get them to participate in physical activity—either with you or with a group. The more they’re exposed to the benefits of a healthy body, the less they’ll fixate on what they look like to others.

Have fun bashing unrealistic media portrayals together. Look for ads that are clearly airbrushed or movies that use stand-ins. Talk about how the media can brainwash our view of health.

Discuss their interests, skills and talents. Help them see that who they are as a person is much greater than their appearance. And that the more they focus on what makes them happy, the less they’ll worry about body image.

Fitness & Health Help them reach realistic goals. If they simply want to lose a little weight by eating a healthier diet—or get stronger through a new exercise regime—be supportive. Understand the difference between a healthy desire to be healthier, and an obsessive disorder. 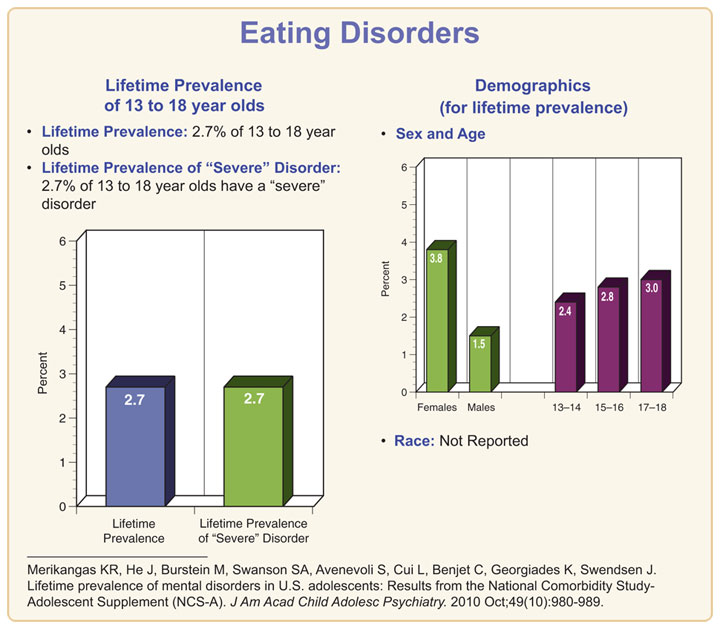 The Centers for Disease Control and Prevention’s National Health and Nutrition Examination Survey (NHANES)  examines the prevalence of eating disorders among children who are slightly younger than those in the NCS-A. Data from the NHANES estimate the prevalence of eating disorders among 8 to 15 year olds to be very low; one tenth of one percent of this group. 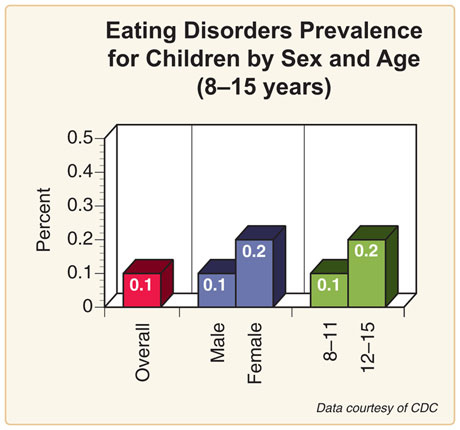 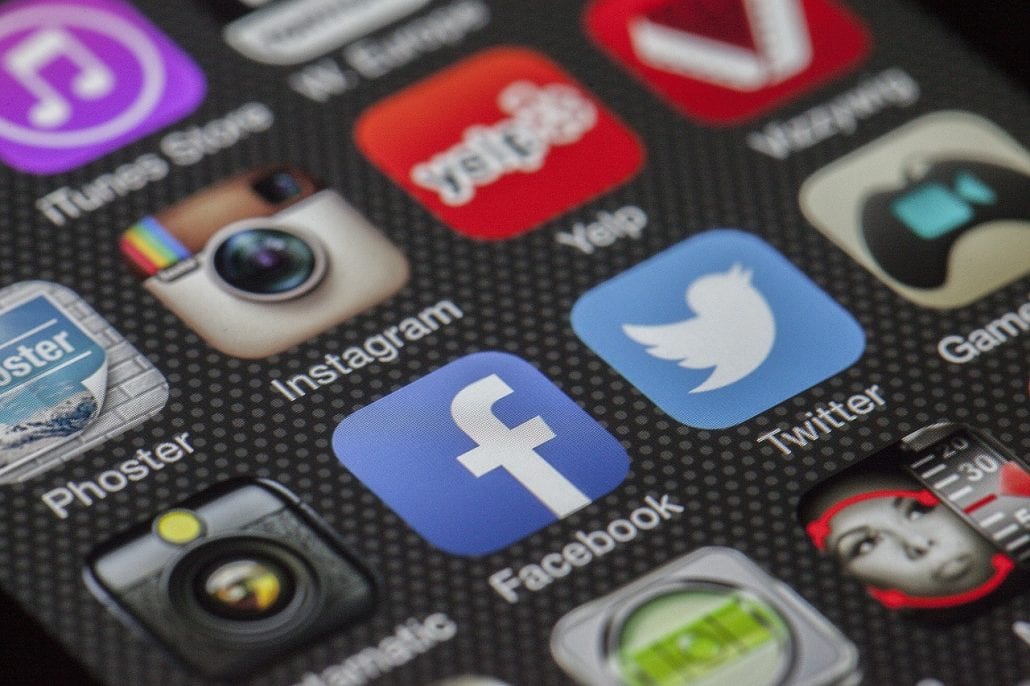 Social Media and Body Issues in Youth
Young adults who log onto social media sites frequently throughout the week or spend hours trawling various social feeds during the day may be at greater risk of eating and body image concerns, according to a new study. Gender, specific age, race, and income did not influence the association—all demographic groups were equally affected.

Over twice the risk

Eating disorders include anorexia nervosa, bulimia nervosa, binge eating disorder, and other clinical and mental health issues where people have a distorted body image and disordered eating. These issues disproportionately affect adolescents and young adults. However, more general disordered eating, body dissatisfaction, and negative or altered body image likely affect a broader group of individuals. The participants who spent the most time on social media throughout the day had 2.2 times the risk of reporting eating and body image concerns, compared to their peers who spent less time on social media. And participants who reported most frequently checking social media throughout the week had 2.6 times the risk, compared with those who checked least frequently.

Online communities, for better or worse

Previous research has shown that people tend to post images online that present themselves positively. For example, users are likely to select the scant few that may make them appear thinner from hundreds of more “accurate” photographs of themselves, resulting in others being exposed to unrealistic expectations for their appearance. In an effort to battle social media-fueled eating disorders, Instagram banned the hashtags ‘thinspiration’ and ‘thinspo,’ but users easily circumvented those barriers by spelling the words slightly differently. YouTube videos about anorexia nervosa that could be classified as “pro-anorexia” received higher viewer ratings than informative videos highlighting the health consequences of the eating disorder.

Given their position of trust, mentors are well-positioned in a youth’s life to discuss the realities of unrealistic media representations. Social media, while it has a lot of positives to offer, can also blur the lines between realistic and unrealistic messaging. Children and teens can be particularly susceptible to this messaging, so guidance provided by a trusted adult in learning how to interpret ads, images, and stories found online in a healthy, positive manner can help to serve as a buffer against the negative effects described in this research.